Step wisely into your next real estate investment.

2019 began in the shadow of market volatility - many gains in the stock market in 2018 were wiped by the new year, and confidence in upward trends have been wavering. Even in times of doubt there are always opportunities for growth, opportunities for change. Which means for us at Stepwise, it’s time to return to one of our oldest traditions, the annual new construction market report, now with an even closer look at economic viability.

You may have read recently that as of January 2019, the supply of housing “for sale” in Philadelphia reached an historic low. New market realities like this require new approaches to investing. And new tools (but more on that later). 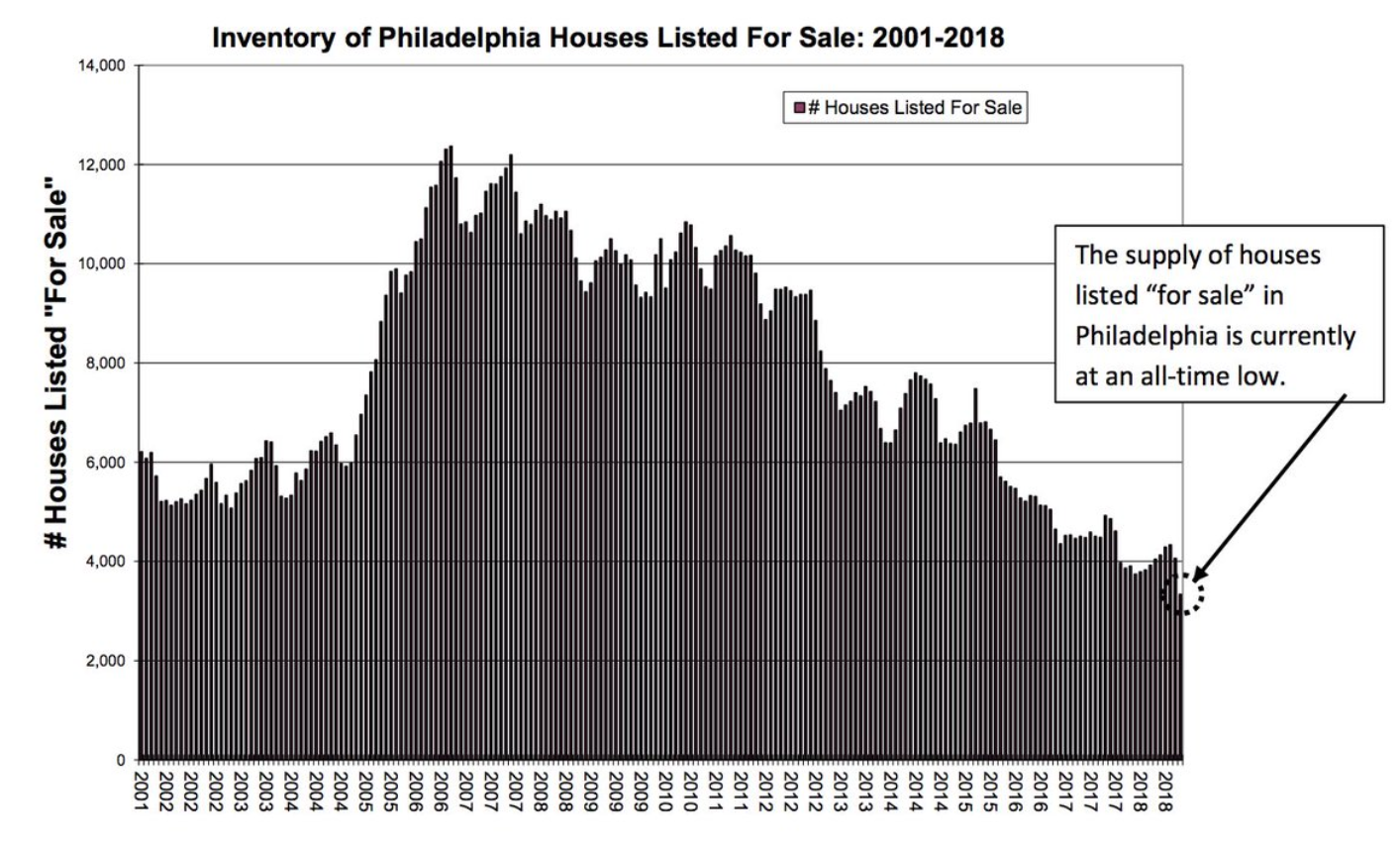 While the supply side is (significantly) lacking, appetite for investing in the Philadelphia’s real estate market is still ravenous, with the pain of the Great Recession an increasingly distant memory in people’s minds. So we’re taking a new approach with this year’s market report. Instead of a retrospective review of building permit activity, we’re taking a closer look at the impact on pricing and profitability given these new market conditions.

For example, how has demand in Point Breeze or Brewerytown affected profit margins to build there? Which lesser-known areas are ready today to support profitable new construction?

If this is your first new construction market report, welcome! And to our regular readers, welcome back.

For the purposes of this analysis, we focus on the top ten percentile of housing sales of 1-4 family dwellings and the average cost of land on a price per square foot basis at the neighborhood level to understand where markets are stably supporting post-renovation values for new construction.

We are excited to leverage our newly developed proprietary valuations for both current and post-renovation estimates to identify individual properties that could be bought at market rate, redeveloped, and sold at market rate for at least a 15% profit. We assume closing costs of 10% on both ends of the transaction being covered by the investing party in its entirety and $120 per square foot in development costs for new construction. We adjust these values and construction costs for national levels of inflation.

The Big Squeeze in Point Breeze

During the three years prior to 2013, the top ten percent of home values were selling in the high $200,000’s. But in 2013, the top ten percent broke through the $300,000 threshold, providing enough activity and value to validate the market for those who previously may have felt the neighborhood was too risky as an investment. Average land values have since jumped an additional $20/sqft to $30/sqft each year for the last four years, with vacant lots selling for over $145,000 at the high end of the market in 2018. That’s more than the price of a home in many parts of the city. 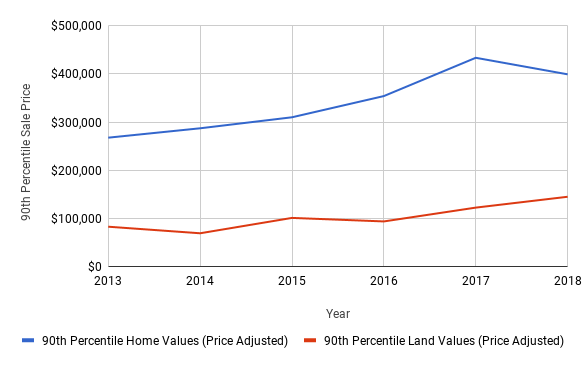 Assuming parity in construction costs, closing costs, average land and building size per project, we’re able to explore how the changes in land prices and post-construction values translate to year-over-year trends in estimated profit margin below. Profit margins appear to have peaked in 2016, a year before post-renovation values peaked in 2017. Increases in land values have pushed estimated profit margins back down to 23% in 2018, similar to 2014 levels when new construction activity crossed into triple digits in the neighborhood annually. 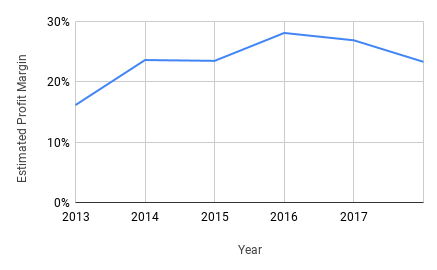 As home values rise, it becomes more attractive to build, that is, until, the cost to build starts outweighing the benefits. And with the cost to build a home fairly constant city-wide on a per square foot basis, investors move to where the hard cost of land can produce competitive profit margins. This likely explains the market shift to Grays Ferry where land was purchase for $74 per square foot on average in 2018 compared to $133 in Point Breeze.

Building Up in Brewerytown

The resurgence in Brewerytown started about two years after it began in Point Breeze. The number of new construction projects in Brewerytown did not reach double digits until 2015, then doubled in 2016 before its leap into triple digits in 2017.

Unlike Point Breeze, the top ten percent sale values of structures stayed roughly the same between 2017 and 2018, while the average cost of land rose by 45% to $64 per square foot. Subsequently, estimated profit margins in Brewerytown in 2018 remained about the same as they were in 2017, decreasing modestly from 36% to 35% considering land size, post-construction square footage, and cost of construction all equal. 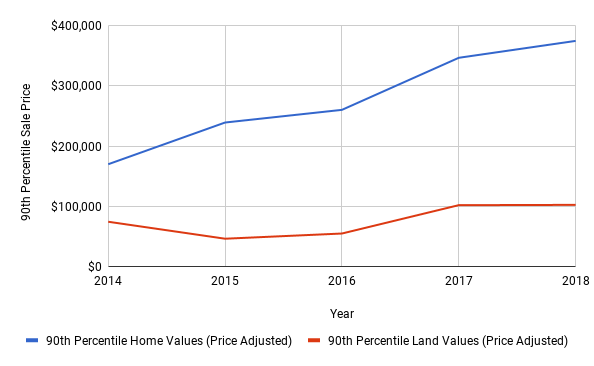 While triple digit new construction activity in Brewerytown hit after it did in Point Breeze, the neighborhood eclipsed the $500,000 outsale threshold seemingly more rapidly in its cycle than in Point Breeze, likely benefitting from the broader health of a Philadelphia market where $500,000 for a single family home became more ordinary than extraordinary in recent years. Profit margins in Brewerytown currently appear to be more favorable relative to Point Breeze due to the difference in land prices and the benefit of an average post-construction square foot size that’s approximately 200 square feet larger (1939 sq.ft. in Brewerytown and 1743 sq.ft. in Point Breeze). 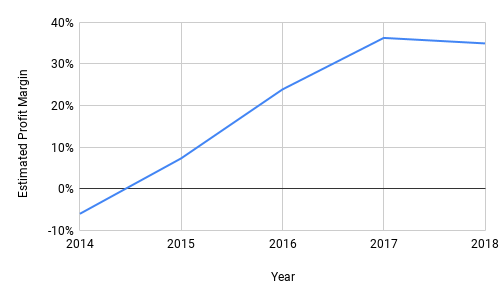 The Land of (Viable) Opportunity

An increase in sale prices for homes in a neighborhood is typically aligned with an increase in the cost of shells and raw land. For the latter, however, a tipping point exists where acquisition costs squeeze the potential margins to the extent where it makes more sense for investors to move on and start planting seeds in the next hot submarket.

Because land may be purchased well in advance of new development occurring, potential post-renovation values represent a better metric to explore the inherent opportunity within a submarket. Our team at Stepwise has developed a set of proprietary valuation models for predicting both the acquisition value and post-renovation value of properties zoned for 1-4 family dwellings (soon available in our automated property specific market reports).

As part of the research and analysis for this report, we leveraged the power of these new predictive models and identified 9,817 parcels of land where the current market economics support viable new construction with at least a 15% profit margin when bought and sold at market rate. Over 70% of these parcels are privately held with the remaining 30% owned by the government. 34% were most recently purchased in the last five years and over 20% are two or more years tax delinquent. 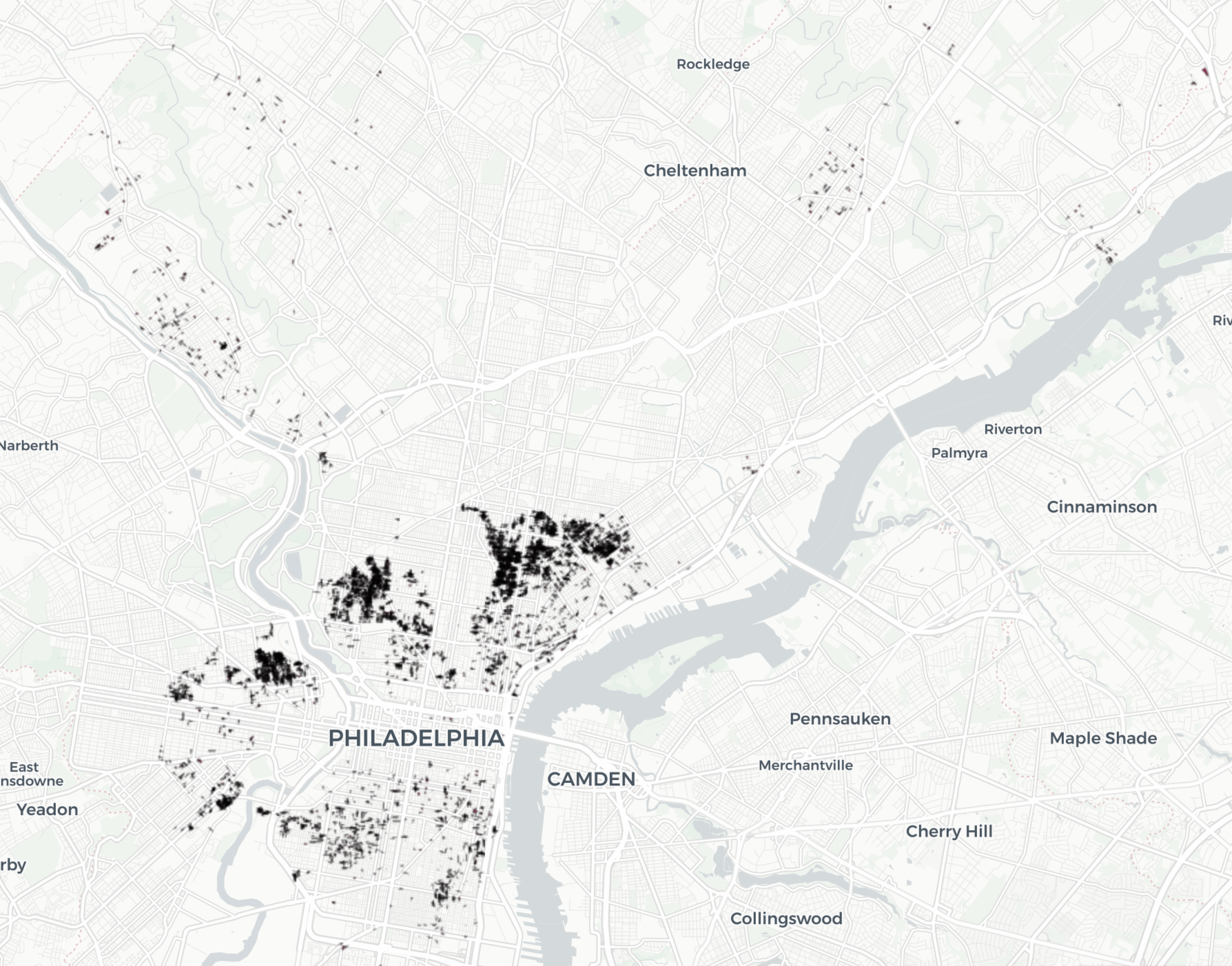 Momentum from certain submarkets tends to have an adjacency effect. For example, development from Point Breeze has seeded activity in Grays Ferry where land is much cheaper on average. Viability is percolating across the river in Southwest Schuylkill, Cedar Park and Kingsessing where land went for $7/sqft, $58/sqft and $15/sqft, respectively on average in 2018. These West Philadelphia neighborhoods benefit from the growth in Spruce Hill and near Clark Park. Development is consequently converging across the Grays Ferry Bridge and pushing past the 52nd Street boundary in West Philadelphia.

Lower Moyamensing is gaining steam, feeding off of the East Passyunk area, while North Central - where there are 2,165 vacant lots - is seeing spillover from Francisville where there are now only 276 lots remaining. New development is pushing past Allegheny into Port Richmond from Fishtown, and a longer term case could be made for the neighborhood of McGuire, wedged above West Kensington on the west side of the El.

Diving deeper, the table below compares the estimated profit margins from 2018 for neighborhoods in varying stages of growth. The analysis takes into account the average land size and improved area of new construction in each neighborhood, as well as the average price per square foot for vacant land and the top 90th percentile sale values for homes on a price per square foot basis. The estimates incorporate an assumption of a $120 per square foot price for new construction and 10% closing costs on both the acquisition of land and sale of the finished home.

Note: By focusing on the top ten percent of outsale values in a neighborhood, one can see if the market can stably support the cost of new construction. Grays Ferry, while showing an estimated average profit that’s negative for properties in the top of the market, only saw 8 properties sell above $300,000 last year showing that new construction has only recently become viable in the neighborhood.

There is no linear trajectory for pricing in a neighborhood. Macro price ceilings - like $500,000 for new construction on the outskirts of Center City - can take effect in any neighborhood where development has taken root only recently compared to other neighborhoods, and wherever there is homeowner appetite. However, neighborhoods flush with activity these last few years like Point Breeze are starting to see profit margins get squeezed as of 2016. And while inventory for sale keeps scraping by or dwindling, what is compelling is how almost 10,000 vacant parcels are already economically viable for development. New construction may not be the cure-all to Philadelphia’s inventory and pricing issues, but what would happen if these properties were turned into workforce housing, selling at $250,000 as opposed to $500,000?

If you are in the process of investing in residential property in Philadelphia - either as a development or as your own home - stay tuned for the release of our new As Is and As Renovated Valuations, soon to be added into our existing Premium Reports which are packed with trends analyzing construction, sales, crime activity and more, in addition to a pro forma calculator to make calculating your potential returns easy to do on the fly.